I’ve been to a few conferences in the last few years, covering various languages and facets of the vast world that is technology, but DevOpsDays Melbourne was the most interesting, and refreshing one I’ve ever been to.

For starters: the schedule was very different, but it worked well. The scheduled program was originally very much open to change, given that only the morning schedules were actually booked. I’ve never been involved in an ‘Open Space’ event before, but my word, did it work well.

A common name for people who just stay in the corridors and talk amongst themselves instead of going to scheduled talks is oft called the “Hallway Track”. I’ve had some amazing insightful conversations in some myself. But the Open Space concept is more like a supercharged hallway track. A 15-minute ‘topic generation’ time is used before a main break in order for people to get a minute to pitch their idea of what they’d like to talk about. These are written down on post-it notes, and during lunch, people vote on what topics they’d like to take part in. The ones with the most votes get allocated half-hour slots in various large rooms, and the ones that don’t get as many votes can use smaller spaces in hallways or seating around the place to discuss their ideas.

The open spaces voting board has been tagged “worst kanban board ever”. #devopsdays - @glasnt

Over the two days, I was involved a few big open space conversations - “Who gets woken up at 3am?”, relating to human and computer-driven mechanisms to work out who is the best person to page when something goes boom in the middle of the night; “Community and Meetups”, where local and interstate meetup and conference organisers were able to share tips (2.5 beers, 2.5 slices of pizza per person), and tricks (if a company wants to sponsor, suggest you use their space for exposure). There was also a very nice SysOps Anonymous slash Phoenix session where people shared their stories about how they survived outages and issues during earthquakes and their datacenter even buring down.

These are the kinds of things that don’t often get shared when you have only a half hour break to find coffee and food, or when you’re sitting hearing one persons story. I found it to be incredibly engaging, and I look forward to the next time I get to be involved in a similar setup.

Also another thing that DevOpsDays did very well was having a panel as the second day keynote. I was lucky enough to be asked to participate in the discussion about the ownership of the tooling platform, which was curated by Daniel Sowter, and MC’d by Sarah Kowalik. Myself, Michael Wu and Mike Williams, along with Daniel and Sarah, were able to discuss a whole lot of different facets based on our combined experience, and overall it was regarded as a good way to start Day Two of the conference.

Excited to see this panel kick off at #devopsdays Melbourne - @SarahKowalik and @glasnt represent! - @auxesis 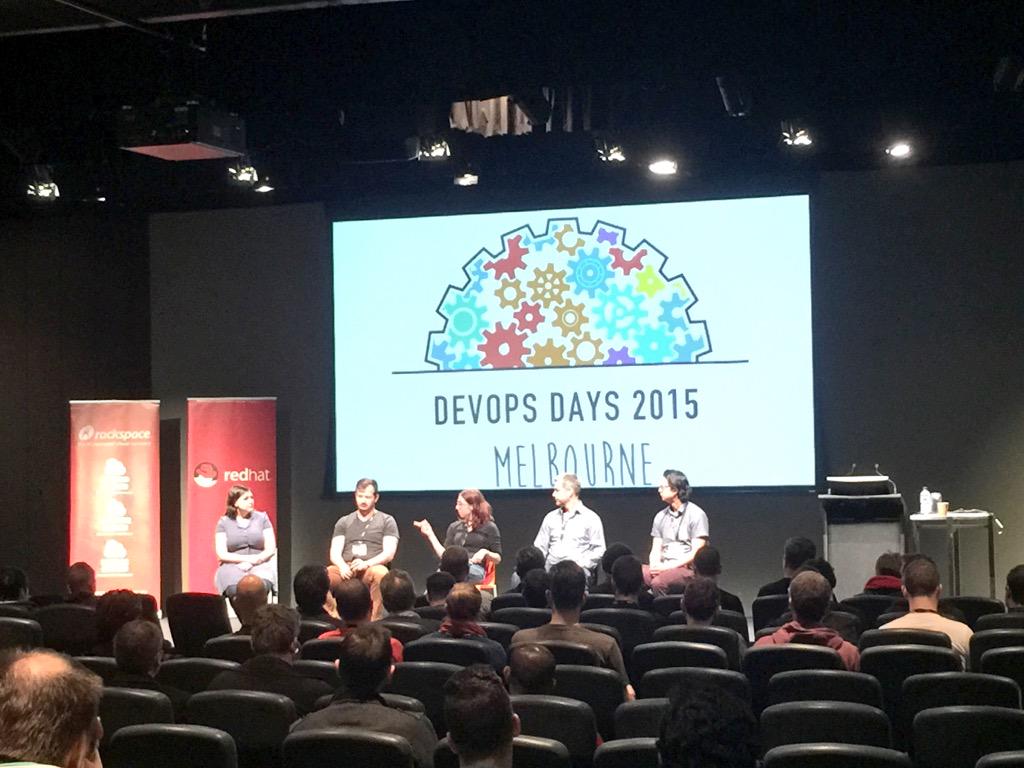 Social Event with No Open Bar

One thing that I think made the panel work really well was the fact that the social event was not an open bar. Galaxy Circus, an arcase slash bowling alley slash laser tag venue just around the corner from the Melbourne Convention and Exhibition Center was used as a venue for all the attendees to burn off energy and socialise without the usual incentive of free alcohol. By all accounts, it meant that there was a higher attendance for the first session the next day, which is always a good thing.

Finally, something that I think worked amazingly was the Ignite Karaoke. For those not familiar with the Ignite concept, you have five minutes to do a lightning-style talk, except your slides are each up for 15 seconds, no exceptions. This allows for a time limited talk that forces the presenter to keep their conversation rolling, and makes for some very short sweet talks.

The Ignite Karaoke concept takes this further by having speakers talk blind - they don’t know what the slides are going to be! As scary as this sounds, with half a dozen or more willing participants who aren’t afraid to make it up as they go along, it made for a tech-style standup where some of the speakers were really able to shine in the heat of the moment. By having two mics rotating, the current speaker can opt to ‘tap out’ at any time, letting the next person with the mic step in and complete the slide. The speaker that just stepped down hands their mic to the next speaker in line that’s not already on stage, and the cycle continues.

At DevOpsDays, the slides used for the tech were taken from previous slides from earlier DevOpsDays events, which made for a trip down memory lane for some of the old hands, but also introduced some new faces, myself included, to some of the concepts that have been discussed at prior conferences, including the term GoatOps, which I had never heard of before I was presented it as part of my deck! It’s going to take me a few days to go through all my notes, tweets and memories to try and remember everything that I learnt and discussed, but it was wonderful event.

If you want to get in on the action, DevOpsDays run globally all year round, but the next Australian based one is in Perth in October, and DevOpsDays will be returning to Sydney in 2016, so watch this space!