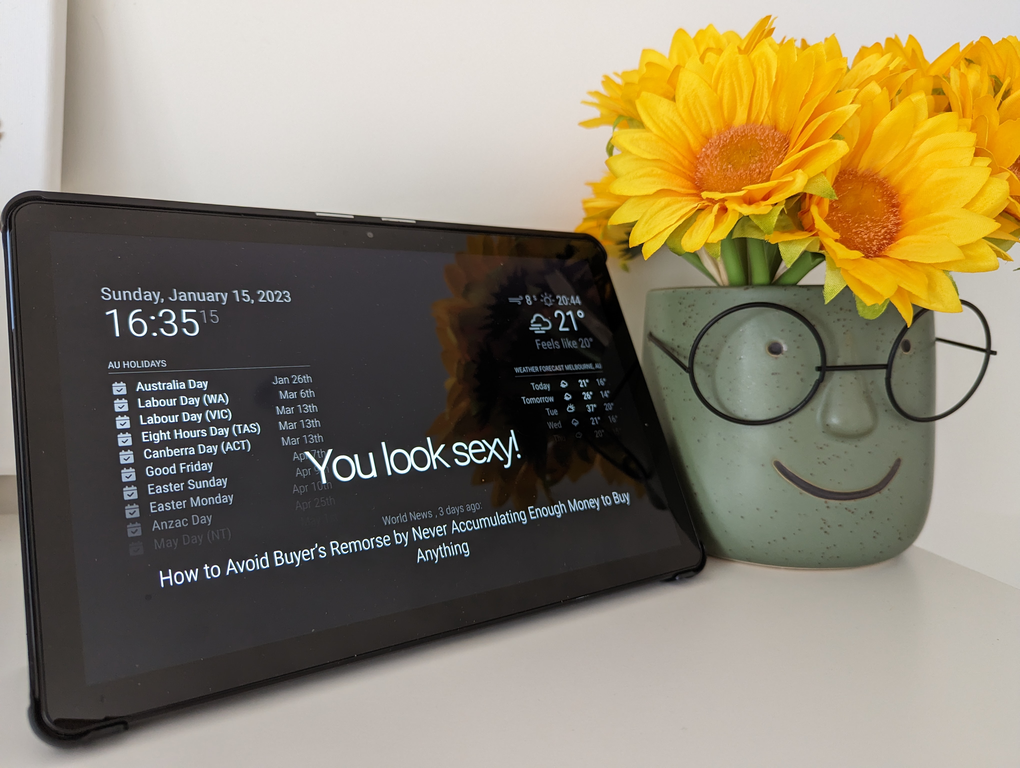 So one quiet Sunday morning How to make a DIY Smart Mirror by Wicked Makers came up in my recommendations, and I learnt about MagicMirror.

I didn’t exactly want to create a two way mirror and the full setup, but I vibed with the UI of the application, so I wanted to try running it. Turns out it’s just an Electron app, or just a node based web server. This is totally in my wheelhouse, and I know this stack. I was able to get it working and configured to my liking very quickly on my MacBook Pro.

Normally I use serverless compute so I wanted to try and get it working on physical hardware, and I was able to find the Raspberry Pi Zero I got in my swag bag at linux.conf.au 2019. But more importantly, I found all the extra components I ordered back in 2019 from Core Electronics.

So, armed with a 2015 micro computer, a mini HDMI to standard HDMI adapter, and a micro USB Host Cable, I set to work.

Thankfully for me I had a bit of a shortcut at the first point, with Raspbian Stretch already installed and connected to my network. Plugging in my desktop USB hub and my monitor, I was able to use the pi as a desktop with my default perphierals, which really helped with the endless sysadminning I ended up having to do.

The Magic Mirror docs are super useful, with easy copy-paste instructions. The first sign I might have problems is that loading Chromium pegged the CPU. But I was able to eventually copy and paste the commands, until the nodejs installation failed. The ARMv6 hardware isn’t supported.

Thankfully, there are ways around this. Using the unofficial nodejs builds, I was able to find a built binary for ARMv6, which I could then install with a simple cp to the system directories.

Continuing the installation process, it only took ~8 minutes, and I thought it would be fine.

Copying the configuration from my initial poking at the project to the raspberry pi via a gist meant I should be up and running. Narrator: they weren’t.

Loading the gist up in Chromium was slow, but then I had to get that code onto my file system. So I thought I’d load up vi. But I couldn’t paste anything. And my reflective vi driving wasn’t working. A lesson I’d already learnt years ago, but recently re-encountered:

Takeaway: You can copy/paste with keyboard shortcuts in Debian terminals by adding Shift (Shift-Ctrl-C/V).

With the config installed, I should just be able to npm run start. But I got an error: Electron not found. Electron wasn’t installed. That’s okay, I can manually install it. Actually, no I couldn’t, the install fails.

Again I hit issues with ARMv6. An architecture that predates Electron itself, I could find ARMv7 binaries, but not ARMv6.

But, according to the package.json, it was only an optional extra (and probably why it wasn’t installed in the first place).

I could get the npm run server process to start, and then (eventually) get Chromium to load it! But some of my content was missing.

As you’ll see from the photo at the top of this article, I had something not to disimilar from the config.js.sample:

But, the entire weather section wasn’t showing up. That entire section was empty. After slowly loading the developer tools in Chromium, where was a syntax error in weather.js line 165. This error didn’t occur on my laptop, using a clone of the repo at the same commit.

A recent addition to JavaScript is optional chaining. Using the ?. syntax, if the function called is undefined or null, undefined is returned (rather than throwing an error).

Support for optional chaining was introduced to Chrome 80, in in Feb 2020. And I was running Chromium 65. I could also reproduce this issue by trying to run the code sample on MDN, which was neat.

Running an apt upgrade brought it up to Chromium 72, still not new enough. I could possibly do an OS upgrade and get new things.

Now, this was a client side issue. The server worked, I just couldn’t fully load the website. This would be a problem if I wanted to open the website on a display connected to the raspberry pi. However, at this point I hadn’t purchased any hardware, just used what I had on hand. So I didn’t have any display to permenantly use. I realised this about an hour into the roughly two hour apt dist-upgrade process (not including time lost to user prompts that sat there, waiting for input). But, I ended up getting a newer version of Chromium that supported optional chaining! The site loaded!

So now I had a server running on a piece of hardware on my local network, but no display for that server.

Ah, but I did. I have a Chrome tablet. And it has a web browser.

To find the local IP I did use ifconfig, but I also found fing which let me see all the devices on my network (and is useful for checking if things are running!).

From there, I could open the IP on my phone (while on my home wifi), and get the thing working!

Next problem: making sure the server restarts after reboot. I could have relearnt systemd, but I’d already avoided relearning iptables so I found pm2 that was recommended on the MagicMirror docs, which lets me setup a service to start my server on boot.

Takeaway: Being able to search and research is a key skill.

The other minor issue I had is that I can load the site, but I get the browser URL bar visible. My laptop is ChromeOS/Android, so if you go to the triple-dot menu > More Tools > Save as Shortcut, you can get a web page as a link on your home screen. And if you long press that icon and select “Open In New Window”, you get what looks like a PWA/standalone app, but more importantly, you don’t get the bevelling.

And so, that’s the state I’m at now: I have the pi sitting under a shelf, attached to a micro-USB power source plugged into a power-board, and a tablet that when it’s sitting on charge wherever it can be showing this display.

Not a bad afternoon of hacking on hardware I happen to have, using skills I already knew, or had long forgotten.